The short answer is: YES.  Amazing and insane. 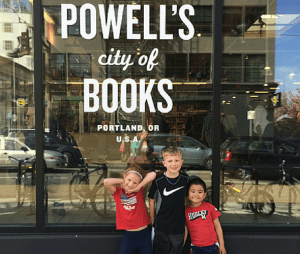 As a book lover and a Portland lover, Powell’s Books is one of my favorite places in the world.  I can spend hours in that huge building, combing through the stacks in all the rooms, each easily labeled by color.   I haven’t been in several years, however, because, well, because: KIDS.  I have a hard enough time keeping track of three kids in Starbucks, let alone in a book store the size of a small town.  (It is literally called “Powell’s City of Books.”)

But just in the last year, I’ve begun to wonder if they could handle it.  And of course, by “they” I mean “I.”  They are not toddlers anymore, and they do love books, so I decided to go during spring break.  The only problem was that my husband doesn’t have the week off, so I’d have to fly solo.

I debated whether or not it was a good idea.  It’s such an amazing place!  It encourages a passion for books and reading!  The reviewers online call it everything from “a monument to literature” to “book-lover’s paradise.”  How could I deny my children this classic Portland experience?

But it is smack dab in the middle of downtown Portland, and my kids are prone to wander and whine.  And it is GIGANTIC!  It fills over 68,000 square feet and approximately 6,000 people come in and out every day.  My ISF (Inner Safety Freak) was picturing all the potential scenarios for child abduction or, much more likely, one of my children causing damage to some rare book that I would then have to purchase for $3700.  Was it worth it?

Even the day of the planned excursion, I wavered.  But my oldest, who is nine, was determined.  I gathered strength from his passion, and we headed downtown.  My first mistake was forgetting to remove the cargo box from the top of my mini-van.  I felt very un-hipster rolling down Burnside in my Honda Odyssey (complete with bumper stickers from my kids’ basketball league) and gigantic black box on the top.  I didn’t have the pink bicycle with training wheels on the rack, but I might as well have.  With the cargo box on, I couldn’t go into any Smart Parks, which are totally my bread and butter when we go downtown.   But I eventually found a spot in a small lot, paid the equivalent of three lattes to park there, and we began the five-block trek to our destination.

It was a gorgeous spring day in Oregon, and I started to get the jazzed up vibe I get whenever I walk around downtown.  Having three kids in tow raised my blood pressure significantly, but I never get tired of walking in Portland.  It is glorious.   When we walked inside Powell’s, I felt a slight surge of pride that my kids were appropriately awed.  “Whoooooaaaa!” and “Awesome!” may have been whispered.  I admit I’d never been to the kids section before, so we got directions to the pink room. 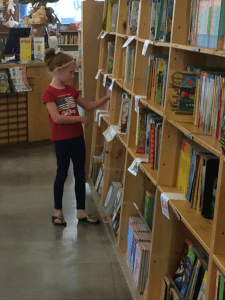 As soon as we entered this section, which is basically the size of a library, the chaos began. Instead of having three lovely little humans in my care, it was like I suddenly had a small bag of bouncy balls that had ripped down the bottom, and they hit the floor and scattered wildly.  No amount of pre-visit coaching prepared us for the excitement and VASTNESS of it all.  Having a nine-year-old boy, a six-year-old girl, and a four-year-old boy, you can imagine their preferences in reading material is just a teensy bit varied.  On top of that, my littlest guy has some sensory issues, and being in crowded places often makes him flip his lid.  He immediately fell on the ground and refused to move or use words that were not screeches.  My oldest sprinted towards Minecraft books and a section titled “Sick and Gross.”  (Because, of course he did.)  My daughter went to the early readers, Elephant and Piggy and anything that had Pinkalicious on the cover.

I swung between trying to convince my preschooler that “This place is so fun!” and just picking him up and carrying his writhing body as I tried to keep tabs on my older two.  They are pretty good at responding to our special family whistle and checking in every few minutes, but still: my ISF was telling me not to lose track of anybody. 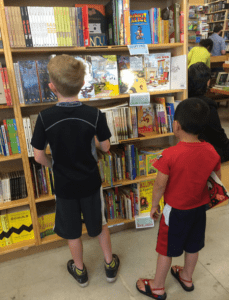 We started with a budget of $6 per kid, which quickly went to $8 and then small mommy loans to be repaid from piggy banks at home.  After everyone had made their selections, we finally were able to sit down at one of the small tables in the Pink Room and truly ENJOY the books. Even Mr. Meltdown found a book to look at and explore.  It was short-lived, but I got a taste of my Powell’s Dream.  Of course, I was sweating like a pig and didn’t even get CLOSE to looking at any books for me, but we were there, and we were reading, and we were LOVING IT, DANGIT.

Would I take my three kids to Powell’s again anytime soon?  I’m not sure I’d use the word “soon” but we will absolutely go back.  I will definitely increase the adult to child ratio next time–and lose the cargo box.  But sharing this Portland treasure with my kids, and continuing to encourage their love of books?  Totally worth the $12 parking and sweaty under-arms.  I may never be mistaken for a hipster, but I’ll always feel at home in Powell’s City of Books. 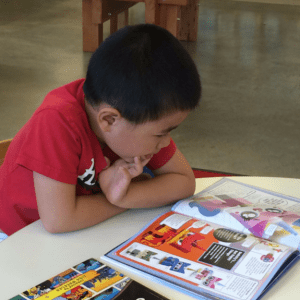 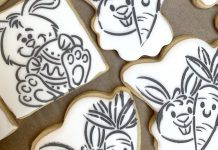 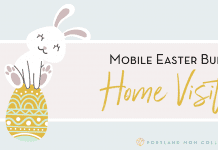 Book a Visit with PMC’s Mobile Easter Bunny! [SOLD OUT] 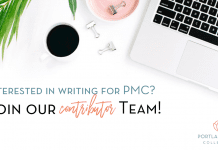