My daughter was born in 2009 via an emergency C-section that proved very traumatic for me. By using a combination of FMLA leave, unpaid leave, and the sick days I had hoarded for over three years, I got three months off of my job as a middle school teacher to try to adjust to my new role as a mom. Unfortunately, I felt as though most of that time was spent recovering from surgery, troubleshooting breastfeeding challenges, and unsuccessfully warding off postpa 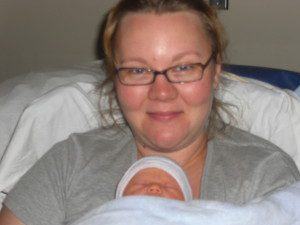 rtum depression, while simultaneously navigating our first holidays with a newborn. I know many moms don’t have the “luxury” of any paid maternity leave. However, like many moms fortunate enough to even get a maternity leave, I watched the time flash by in a blur of sleepless nights, diaper changes, and doctor’s appointments, and before I knew it, I was back at work trying to figure out how to squeeze pumping sessions, grading, planning, meetings, and conversations with my colleagues into my planning periods or after school.

At that point, I was tempted to leave my job to become a stay-at-home mom, but my husband was a quarter of the way through his doctoral program, and my job provided the lion’s share of our household income as well as my medical benefits. I pushed down the desire to be home with my baby and, during a time when I often felt inadequate to figure out much less provide what my baby needed, I relished the opportunity to go to work to do activities in which I knew I excelled. So much of being a new mom felt unfamiliar, but at least in my classroom I felt competent.

By trial and error, we found routines that worked for our family, and I continued to work full-time until my daughter was four and a half. Last summer my husband completed his PhD and secured a job that would require us to move from Virginia–where we had a substantial support system of family and friends–to Oregon–where we knew almost no one. I knew that this move would present our family with new challenges and transitions, so my husband and I figured out how I could leave my job and spend the last year before Karys went to kindergarten at home with her. I jokingly called this time my “real maternity leave,” since I went through so much of the first one in a postpartum daze. So, while many of my friends who stayed home with their infants were returning to work, I became a stay-at-home-mom to an almost five-year-old.

In some ways, the timing of my “sabbatical” was inopportune. I’m sure I would have enjoyed having more time at home with my sweet-smelling infant to “sleep when the baby sleeps” (as if) and firmly establish my milk supply. I would have loved spending time with my SAHM friends or attending daytime La Leche League meetings and baby play groups. 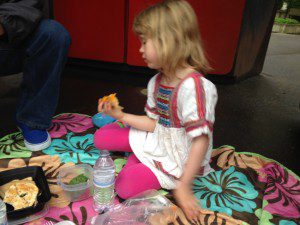 I would have appreciated the time visiting with my retired mother during the day instead of handing my daughter off to Nana at 6:30 in the morning and picking her up right before dinnertime.

I would have missed the impromptu picnics under the statue in the park and the spur of the moment parties planned in under an hour. At five years old, Karys loves to plan events, even when there’s no occasion to speak of. I’ve been her party planning assistant for many events during the past year, including a birthday party for our cat and a mid-day dance party with our friend Emi.

I would have missed exploring Portland with Karys. I’m sure that we would have done some adventuring in our new city if I had go 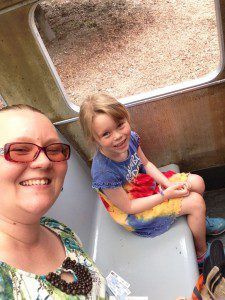 tten a job right away, but our ability to do so would have been limited by time and energy. As it was, we were able to plan itineraries that took us all over the city.

I would have missed the playdates with friends. Karys and I have developed a wonderful group of friends who are also new to Portland. If I’d been working outside the home, we might have still met some of them, but we wouldn’t have had the time to develop the meaningful relationships that come from spending time with the same people repeatedly.

I would have missed being able to explore my options for freelance work. If I’d gone straight back to teaching, I might have missed the opportunity to figure out what other types of work I might enjoy. Karys went to preschool two days a week and I used my fourteen child-free hours each week to finish a manuscript of my memoir, launch a freelance writing career, and train as a doula. I know for sure that I would not have had the energy to try these things if I was busy trying to figure out how to juggle my responsibilities at work and at home.

Most of all, I would have missed getting to know my daughter as a person. As much fun as she was as a baby, she’s even more fun now. At five, she has developed a witty sense of humor, wonder, and magic. Going anywhere with her is a trip to Wonderland. Being with her is like stepping through the looking glass; I don’t know whether up is up or even who we are at any given moment, so elaborate are her imagined worlds. 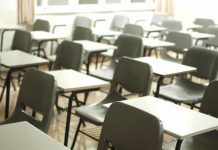 Burnout and Black Screens: Being a Teacher and Parent in a Pandemic

Stop Getting Arm-Grabbed and Start Having a Night of Ease

Thinking About Returning to Paid Work?