Have you ever heard of a boutique, storybook Santa photography session? I hadn’t, either, until I was contacted by Miriam Haugen at The Santa Experience. By phone, she shared some of what The Santa Experience entails. “It’s a lot more than a typical pictures with Santa,” she said, enthusiastically, “You  just need to experience it to see what I mean.”

A few weeks later, I left Miriam’s studio knowing one thing is for sure: she was right. Way beyond the typical photo shoot, The Santa Experience is a whole new dimension in holiday offerings. Let me be clear: The Santa Experience is not for everybody. It is nothing like a Santa visit at the mall or even a holiday mini-session with a professional photographer. It’s bigger. Way bigger.

The Santa Experience creates high-end, holiday-themed family heirlooms through photography. It begins with a 60-minute, personalized photo session with Santa, followed by a meeting with staff to review images a few days later. It then culminates in a selection of carefully transformed portraits available in a variety of formats, including gorgeous storybooks – where your children are the characters!

In many ways, you just have to see it to believe it.

An October Visit with Santa

I took along two of my four kids, Kyle, 6 and Daphne, 3, to Miriam’s studio to experience The Santa Experience. We arrived a little war-torn and weary from our drive. Daphne had almost fallen asleep but then didn’t, making her suuuuper cranky. Perfect mood for a photo shoot, I thought glumly. 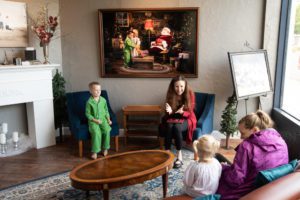 As we inched our way into the waiting area, Miriam emerged and excitedly told the kids she had just been chatting with Santa about milk and cookies. To my amusement, Daphne perked right up straight away with that opener. As we talked, we entered a changing room where the kids put on high-quality, old-timey pajamas with amazingly little fuss. “Who are these children?, I wondered, as they cooperated with little prompting.

That should have been my first clue we were in for something different. Freshly dressed, Miriam guided the kids to another room, a carefully curated holiday space. Santa was waiting there in a traditional rocking chair, and I noted the thoughtful details: classic vintage toys, a leather-bound “Nice Book,” and an old-fashioned telephone.

You would think the kids would question why they were meeting Santa in October, but they jumped in without skipping a beat. Kyle showed no fear in going up to Santa for a chat. Daphne was initially more reserved, but would not take her eyes off the fascinating scene before her. She was a little hesitant, so I appreciated the patience everyone had as she warmed up to the idea.

Fun for Mom, Too!

Over the course of the next hour, I went through a series of joyous emotions watching my kids wander through Santa’s story line. I don’t know who had more fun, the kids or me!

Miriam’s shutter snapped when the kids received magic dust in their customized Magic Boxes, sprinkling their dust on Santa’s feet. With Santa’s guidance, the kids called Bernard the Elf at the North Pole. They even painted toys that could turn colors just by saying the color out loud! And, of course, they enjoyed some milk and cookies. At every step, Miriam recorded the memory. 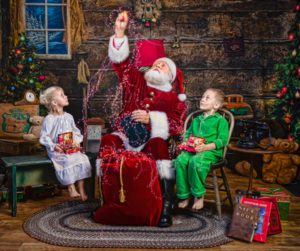 Miriam composed scenes with expert attention to detail; Santa seamlessly incorporated her feedback while staying, you know, Santa. Miriam’s assistant adjusted toys, moved furniture, and positioned the children as needed to get the shot just right. But the kids, wrapped up in Santa’s specifics, hardly paid any mind. They just carried along with Santa’s next topic as part of this magical story.

I told Miriam later I had the same feeling watching their photo session as I do when watching my kids in a school performance: something that clearly took a lot time, focus, and energy was happening before my very eyes, the kids knew it was “the real” Santa, and I got to witness it all. Amazing!

About a week later, we met again to review the images. They had picked out and prepared some favorites, but wanted my feedback as to which ones I preferred. Families who do The Santa Experience can select custom wall art,  storybooks, gift prints, and other smaller items such as ornaments, photo blocks, and holiday cards. Depending on your selection, families can expect to pay somewhere between $600-$1200 for the entire package, including the photo shoot.

Viewing the photos for the first time, projected on the wall, I relived the entire photo session all over again. I might have even gotten a little bit teary-eyed! Together, we created the building blocks of my kids’ special book, and I can’t wait to gift it to their grandparents this season. 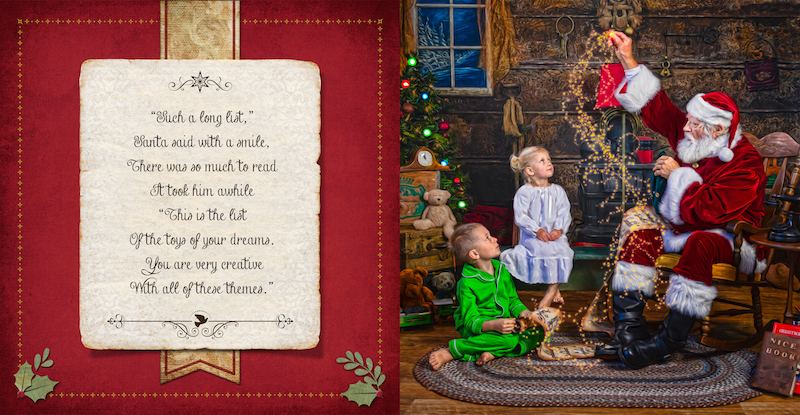 The Santa Experience will operate out of its Beaverton studio from November 16-30. All other appointments will be at Haugen’s Galleri in Monmouth, Oregon. Spots are limited, 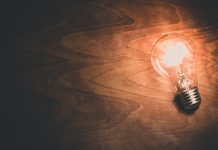 Reimagining Life and Holidays in a Pandemic 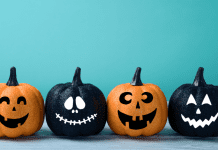 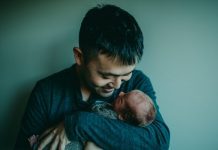